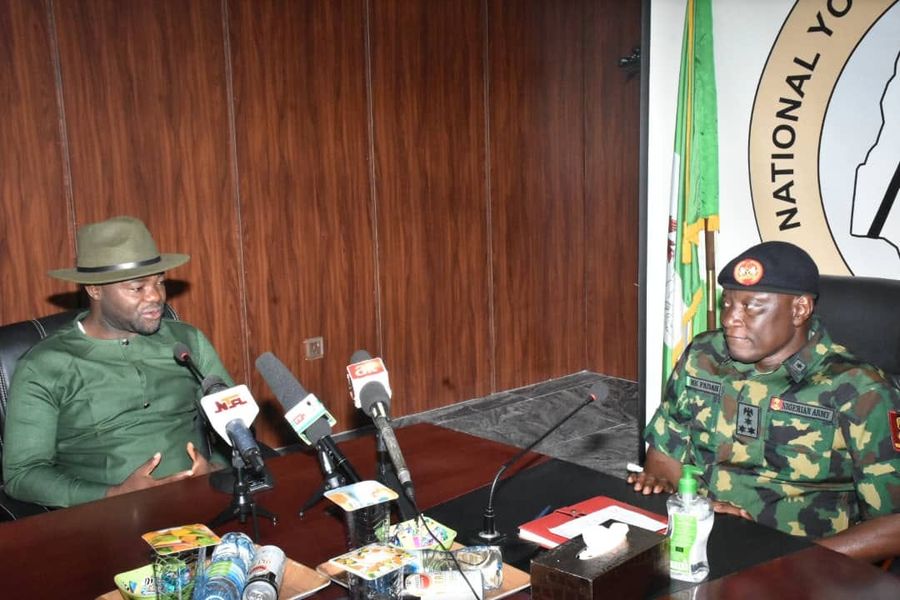 According to Mr. Victor Udoh, the Executive Secretary of the Civil Society Coalition for Transparency and Good Governance, the organization will do everything in its ability to make the creation of the NYSC Trust Fund a reality.

He described NYSC as the most formidable, organized, and well-composed youth organization in the country. When he and other coalition members paid Brigadier General Muhammad Kaku Fadah a courtesy visit at his office in Abuja today, he made this statement.

He claimed that the country has become more integrated and cohesive over time as a single, unbreakable unit thanks to NYSC.

For the various innovations the Scheme has recorded over the years, Udoh commended the Scheme's management and previous Director-Generals.

He advised General Fadah to build on the accomplishments of his forerunners rather than lowering the bar. Invoking the involvement of Civil Society Organizations in NYSC activities, he asked the Director-General to leave the program in better shape than when he found it.

"We are sure that the NYSC Trust Fund has great intentions, and they shouldn't be thwarted by shady dealings. For this reason, the CSOs are there to gather accurate information and disseminate it to the community.

"We believe the Trust Fund will prosper under your leadership. We want to reassure you that we shall take on the task of dispelling the false notion and the few mistaken statements about the noble nature of the intentions of the NYSC Trust rust Fund as knowledgeable members of the society.

We will also make use of this chance to urge the National Assembly and the Presidency to view this as crucial and to work around the clock to ensure that it is signed on time.

Udoh praised the succeeding Corps Members for their great levels of patriotism, particularly when taking part in the national election process.

The National Assembly's two chambers have approved a measure establishing the NYSC Trust Fund, which will require companies doing business in Nigeria to contribute 1% of their net profits to the trust fund.

Brigadier General Muhammad Kaku Fadah, the Director-General of the National Youth Service Corps, stated in his remarks that the Scheme will not be discouraged by critics because the fund was established to improve Corps Members and society at large.

With your generous support, we will keep moving in that direction while staying focused, he stated. Fadah praised the CSO for also promoting the trust fund bill's enactment into law and gave his assurance that the two groups will cooperate for the sake of the NYSC.

"I'm committing in the strongest possible terms that we'll work with you. Next year, NYSC will mark its 50th anniversary, and a committee has been established to make sure that we build on our current accomplishments.

As stakeholders, let's have conversations that will benefit us. I'm sure your goal is to improve the system for society. I am steadfast and certain that my leadership will succeed in doing so," Fadah stated.

If the trust fund bill is ultimately signed by President Muhammadu Buhari, the NYSC would be reinvented and strengthened, to the fullest benefit of the Corps Members, according to the Director of the Ventures Management Department, Prince Momoh Mohammed.

According to Momoh, when the Corps Members start working, there will be a cascading effect of job creation, and they will also be able to hire other Nigerians.

The facilities at our orientation camp will see a significant facelift. Before the introduction of the participation of Corps Members in elections, we were all aware of how our elections worked.