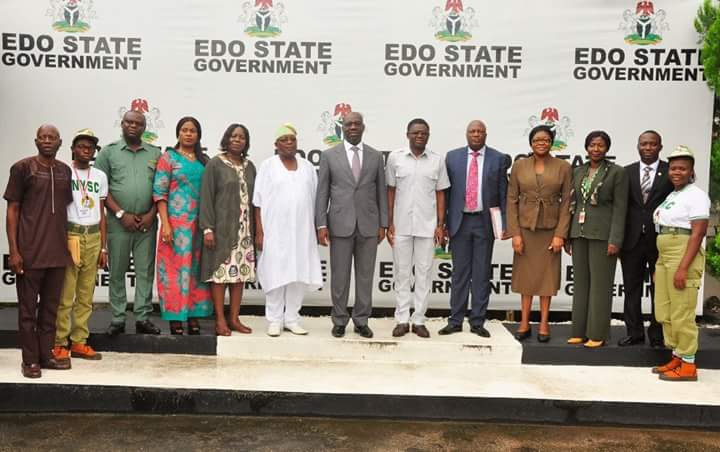 The Edo State Governor, Mr. Godwin Obaseki, has pledged his support and partnership with the National Youth Service Corps (NYSC), Edo State seeking the service of corps members in projecting his administration's reforms in terms of education and health sectors to benefit people living in rural areas of the state.

Gov. Obaseki disclosed during the courtesy visit of the new state Coordinator of the NYSC in the state, Mr. Adebayo Ojo, to the Government House, in Benin City, on Monday. He assured that the state government will work harmoniously together with the NYSC as partners to deliver more value in terms of education and healthcare to people residing in the rural areas.

He said, "My administration is committed to supporting you. We will include you in our plans to ensure that our people feel your impact. We understand you have some challenges, and we have you in mind.

"I want to assure you that officials posted to the state are not strangers in our land; We will treat you as one of us as we see you as part of us. The services of corps members who serve as teachers and doctors posted to rural areas will greatly help our people," he said.

While speaking on unemployability status as paramount amongst unemployed youths, he explained that his administration intends to make unemployment history in the state, noting that the state government would need the support of the NYSC for the government to achieve her plans.

The NYSC state coordinator, Mr. Clement Ojo in his own remarks, stated that a total of 6,653 corps members were currently serving in the state, including 3,144 males and 3,509 females. He added that 55 of the corps members are medical doctors, 33 of them are pharmacists and 81, lawyers.

Mr. Ojo further noted that in support of governor Obaseki's policy on revamping the education sector, about 90 percent of the corps members in the state are posted to secondary schools across the state as their Places of Primary Assignment (PPA) to further enhance the vision of the administration.

How to get to Edo state NYSC government support group