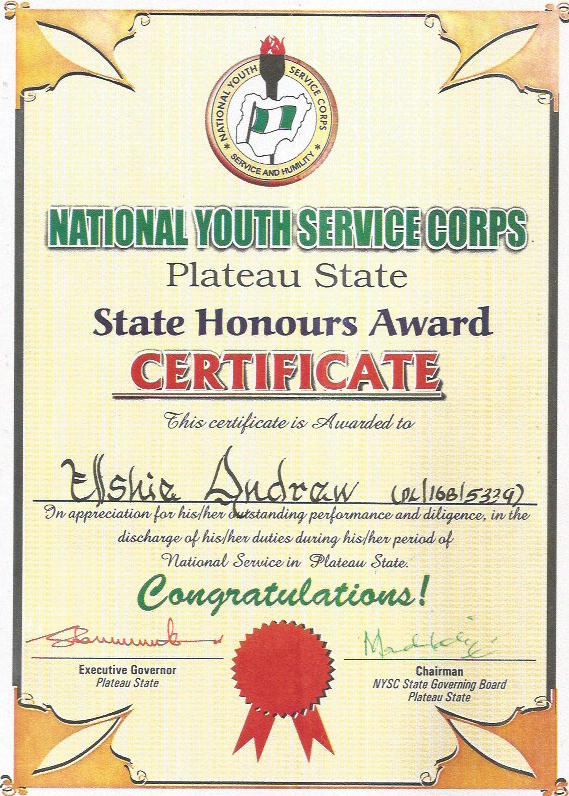 He is a graduate of Biochemistry with second class upper division. He hails from Bekwarra LGA of Cross River state and had served in the 2016 Batch B stream 2, which passed out on December,2017. He also served as the corps member Liaison officer (CLO) for his Place of primary assignment (PPA) and a Red Cross volunteer in NYSC camp Mangu and the sustainable development goals (SDGs) corps member volunteer.

Andrew dedicated his works to all orphans and motherless babies all over the world, particularly to the orphans of our lady of Apostles (OLA) orphanage, Zawan, Jos, Plateau state, Nigeria.

During his period of National Service in COCIN Fellowship secondary school Gidan-Adamu, in Shendam LGA of Plateau state, he embarked on the following twelve (12) CDS projects:

"First and foremost I thank God Almighty for keeping to His promise of seeing that the projects were a success, I return all glory and honour to Him.  “A tree cannot make a forest”, so many hands where on deck before these projects became a reality. Many I may not be able to mention, but God Almighty, the giver of life will reward them all in Jesus name, Amen", he said.

"I wish to thank first of all the management of NYSC for providing me with the needed atmosphere to fulfil this noble course. I appreciate the tireless effort of the state coordinator, NYSC, Plateau state. The Zonal Inspector zone D (Shendam) Mr. Sunday Awak, was indeed a source of strength and inspiration throughout the period of these projects. Starting from the orientation camp when he took the lectures, he has been a father and a mentor to me. I appreciate also the support and guidance of the Local Government Inspector, Shendam L.G.A., Mr. Wovi Bitrus. My gratitude goes also to the Honourable commissioner for Health, Plateau state for his generous support toward the execution of these projects. In a very special way I wish to thank all the sponsors of these projects, without whom the projects wouldn’t have become a reality", Andrew said, expressing his gratitude for the success of the projects.

Below are the details of all the CDS projects carried out by Andrew with their photos with the reasons he embarked on each of them as explained by him:

1 ) 1. Donation Of Items To Orphanage

Assorted food items and toiletries were donated to Our Lady of Apostles (OLA) orphanage, Zwan, Jos, Plateau state on 1st of November, 2017. 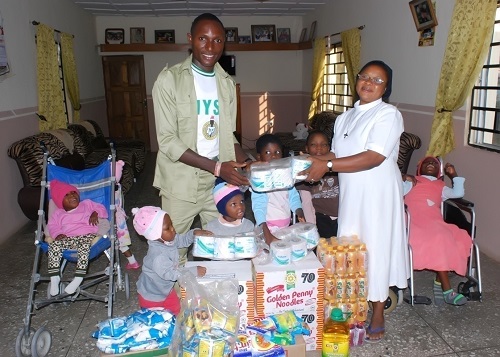 A photograph with the children, the Rev. Sister in charge and some of the donated items.

My choice of this project as part of my CDS project, was because of the fact that most of the orphanage that harbour orphans and motherless babies have less funding to carter for the children’s basic needs like education, good shelter and food. So in order to identify with these children so as to give them a sense of belonging and happiness, the project was embarked on. 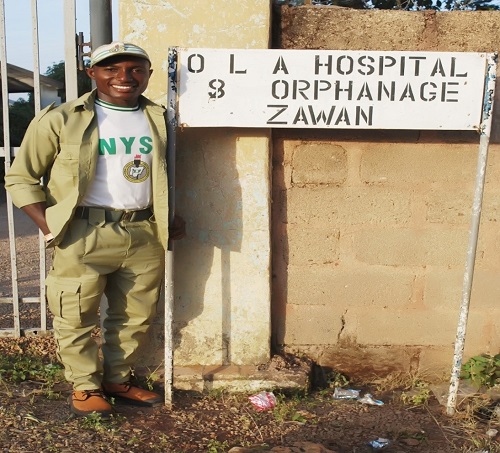 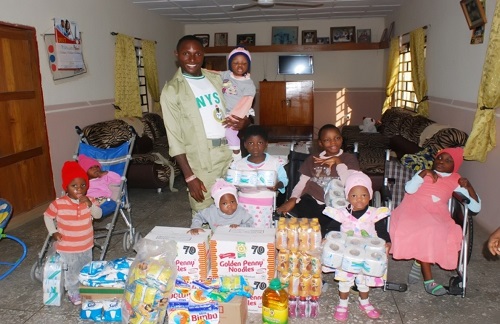 2 )    2. Award Of Scholarship To Under-Privileged Students 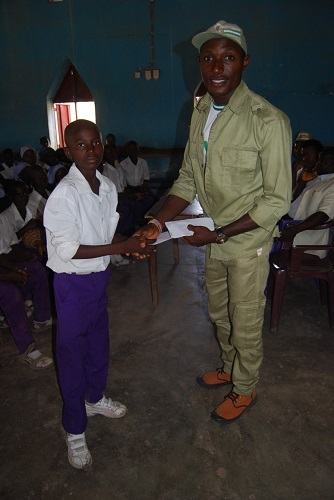 A Photograph with one of the scholars

Scholarship award in form of cash was given to five (5) students of COCIN fellowship secondary school, Gidan-Adamu. 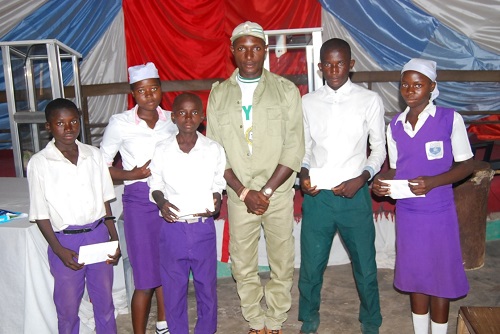 A photographs with the awardees

At my arrival in COCIN fellowship secondary school Gidan-Adamu, some of the students were consistently sent out of school for their inability to pay their school fees. Some of these students with the help of the school management were identified and 50% of their school fees were paid.

The criteria used for their selection include:

This project was executed on November 14th, 2017 in COCIN fellowship secondary school Gidan-Adamu.

3 ) 3. Donation Of School Uniforms, Notebooks and Stockings To Students

More than a hundred customized notebooks was distributed to all the students of COCIN Fellowship secondary school Gidan-Adamu, Shendam.

A sample of the customized notebooks

The need to have notebooks distributed was as a result of the fact that most of the students have no writing materials like notebooks, so much so that some of the students, use only one notebook (40 leaves) to take note for all subjects. Some time these books get exhausted, making it impossible for them to copy notes in class. 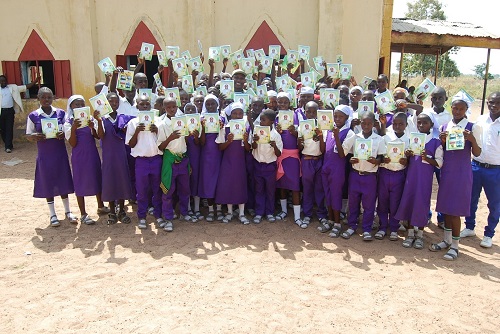 A group photograph with some of the students after the distribution

School uniforms and stockings (sucks) were donated to two students (a male and a female) of COCIN fellowship secondary school Gidan-Adamu. 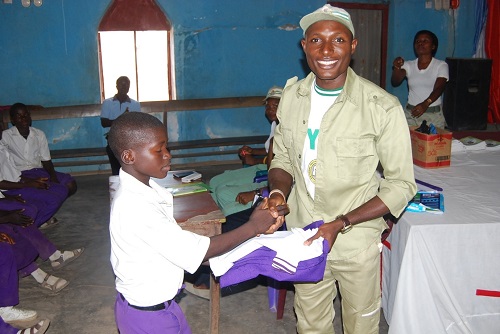 The male students who benefitted from the school uniform project
.

Having being posted to Gidan-Adamu community for my national service I discovered that majority of the villagers don’t have basic knowledge of the computer thus the need for this project. 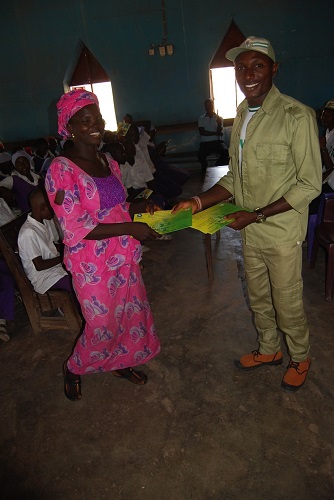 One of the participants receiving her certificate of participation

So with the help of other corps members, the training was kicked started and lasted for six weeks; from September, 2017 through October, 2017. 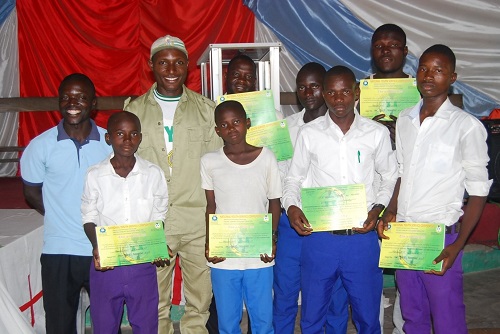 A Photograph with some of the participant awarded certificate 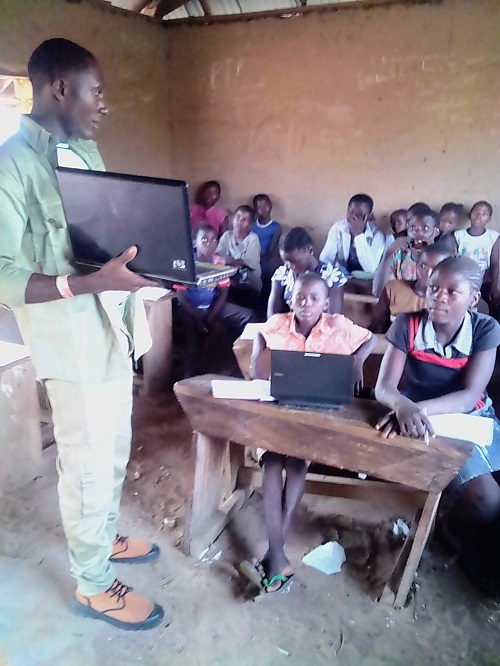 During the computer training

A sample of the certificate awarded to some of the participant

At the end of the training program, participants were graduated and the consistent ones given a certificate of participation free of charge.

On my arrival in Gidan- Adamu community, I realised most of the people were really lagging behind educationally, as many ranging from students and non-students alike cannot speak the English language fluently, neither can they read nor write. 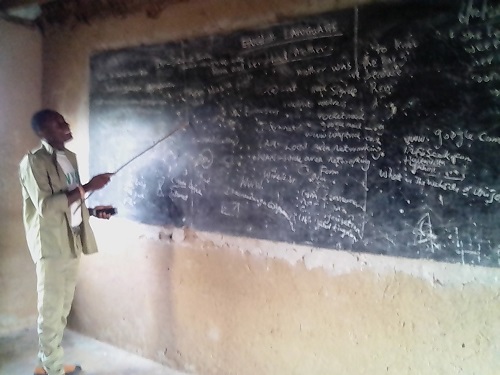 During the extra –mural classes in Gidan- Adamu community 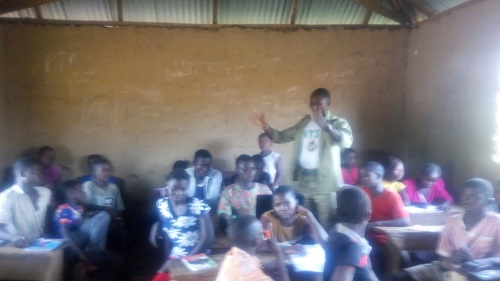 The extra-mural class in progress

The COCIN fellowship secondary school is still a baby school and so many facilities including the examination hall for the conduct of examinations like WAEC, NECO etc, are still not in place. As a result of this, the school is yet to have a centre for either the JSSCE or SSCE which make the student leave for other schools in order to sit for these examinations. This necessitated me taking up the project of the examination hall. 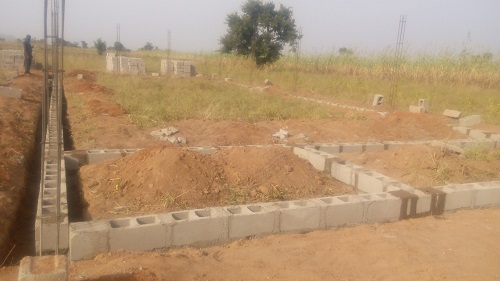 The examination hall at foundation level

This is the most capital intensive project of all my personal CDS projects. The building was raised to lintel level and have been handed over to COCIN Fellowship, as it is due to be completed soon, since the resources needed for its completion are already on ground. 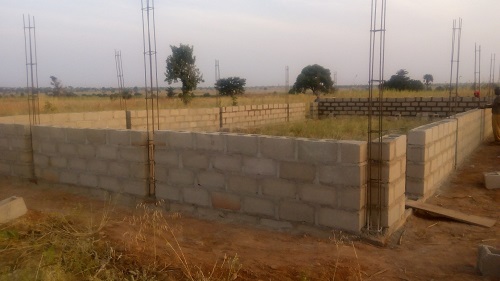 The examination hall building in progress 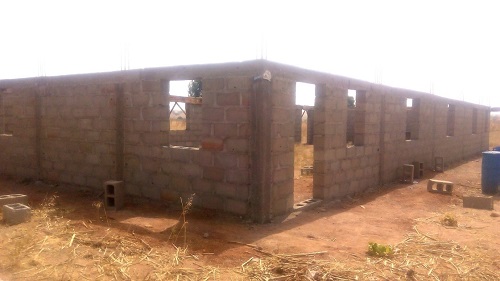 The examination hall at lintel level

After some of the trees around the school premises were cut down for log, it was now imperative to replant new ones in order to curb desertification. 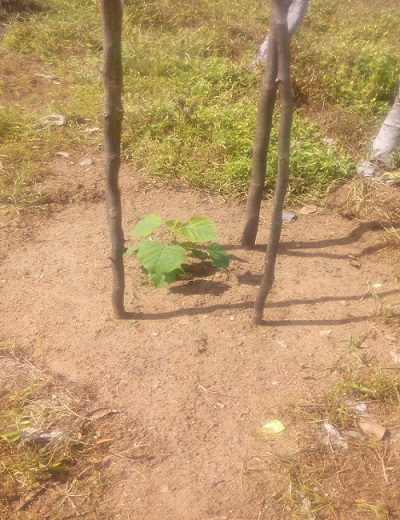 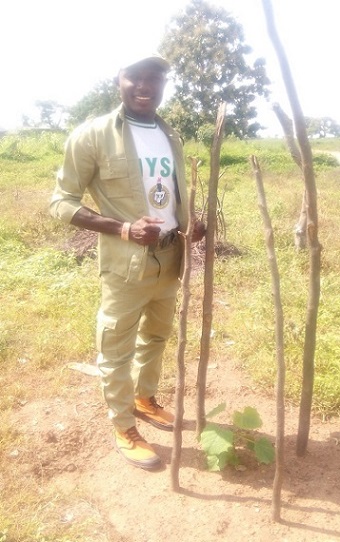 With the help of the school management, the press club was established in COCIN Fellowship secondary school, Gidan-Adamu. The aim of establishing the club is to promote a reading culture among the students and to inspire them for future career in communication.

A Photograph with members of the press club

The inter-house sports competition was organised for COCIN Fellowship Secondary school Gidan-Adamu,after which prizes were awarded to winners. 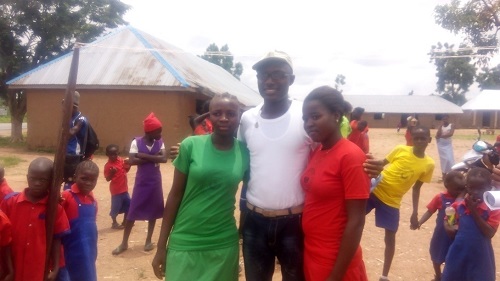 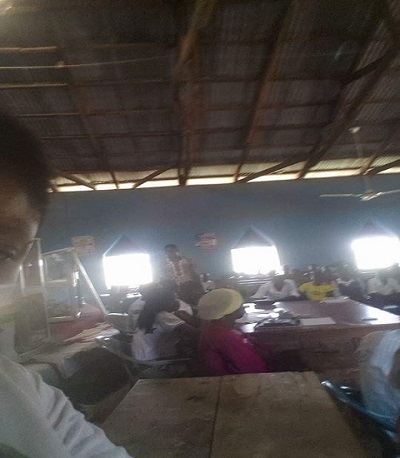 During the inter-house quiz competition 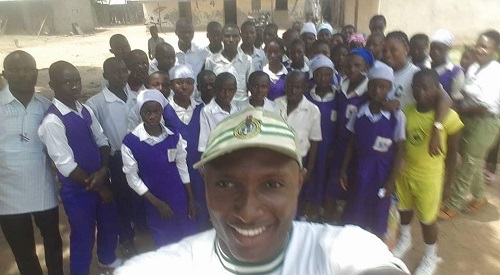 “Health is wealth”, Gidan-Adamu community is surrounded by swamps that serve as breeding grounds for mosquitoes. 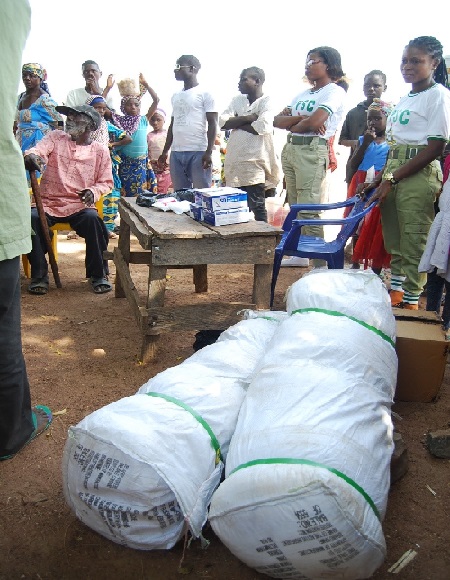 The bales of mosquito treated nets distributed to the community

So the people are constantly threatened by mosquitoes hence malaria. As a corps member serving in Gidan-Adamu I had malaria attack for more than three times not to mention those of other corps members. 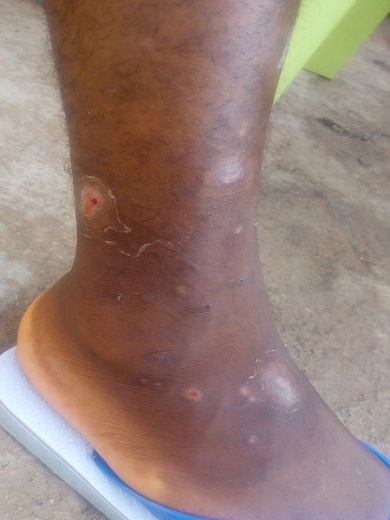 This is a picture of the ulcerated leg of one of the corps members serving in Gidan-Adamu, as a result mosquito bites.

So in order to combat malaria and help alleviate the suffering of the people I decided to take it up as a CDS project. 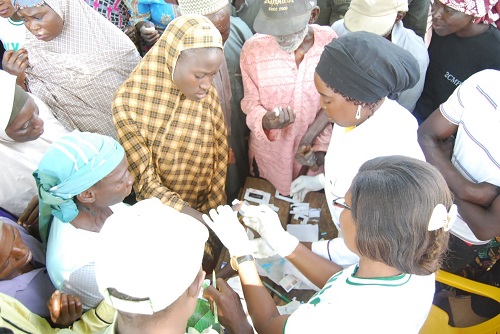 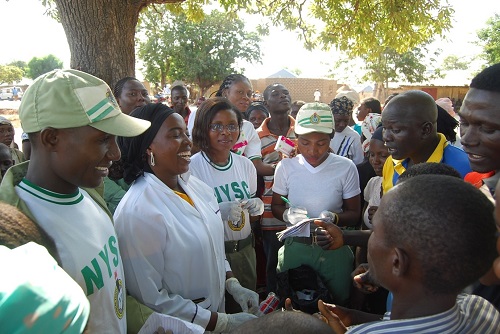 The malaria test exercise in progress

With support from the ministry of health and the roll back malaria program, plateau state, the materials for the exercise were obtained. Malaria Tests were ran on available members of the community and anti-malaria drugs were administered on any one that tested positive to malaria; more than five hundred (500) pieces of anti-malaria drugs were released for the community, as the remaining drugs after exercise were deposited at the COCIN Clinic for free administration to any malaria patient from Gidan-Adamu which served the community for months after my service year. 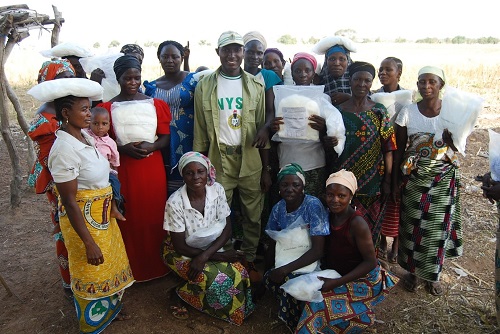 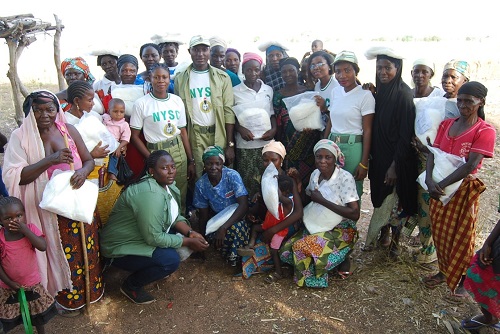 Some of the beneficiaries of the mosquito nets distribution

A total of one hundred mosquito treated nets were distributed to available members of the community. 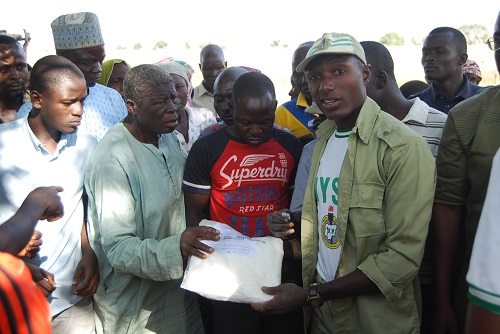 During the distribution of the mosquito nets

Assorted food items and toiletries were donated to shendam prison on October 2nd, 2017 to commemorate Nigeria’s 57th Independence Day celebration. During the visit, the inmates were admonished to remain patriotic and optimistic even though they are in prison.